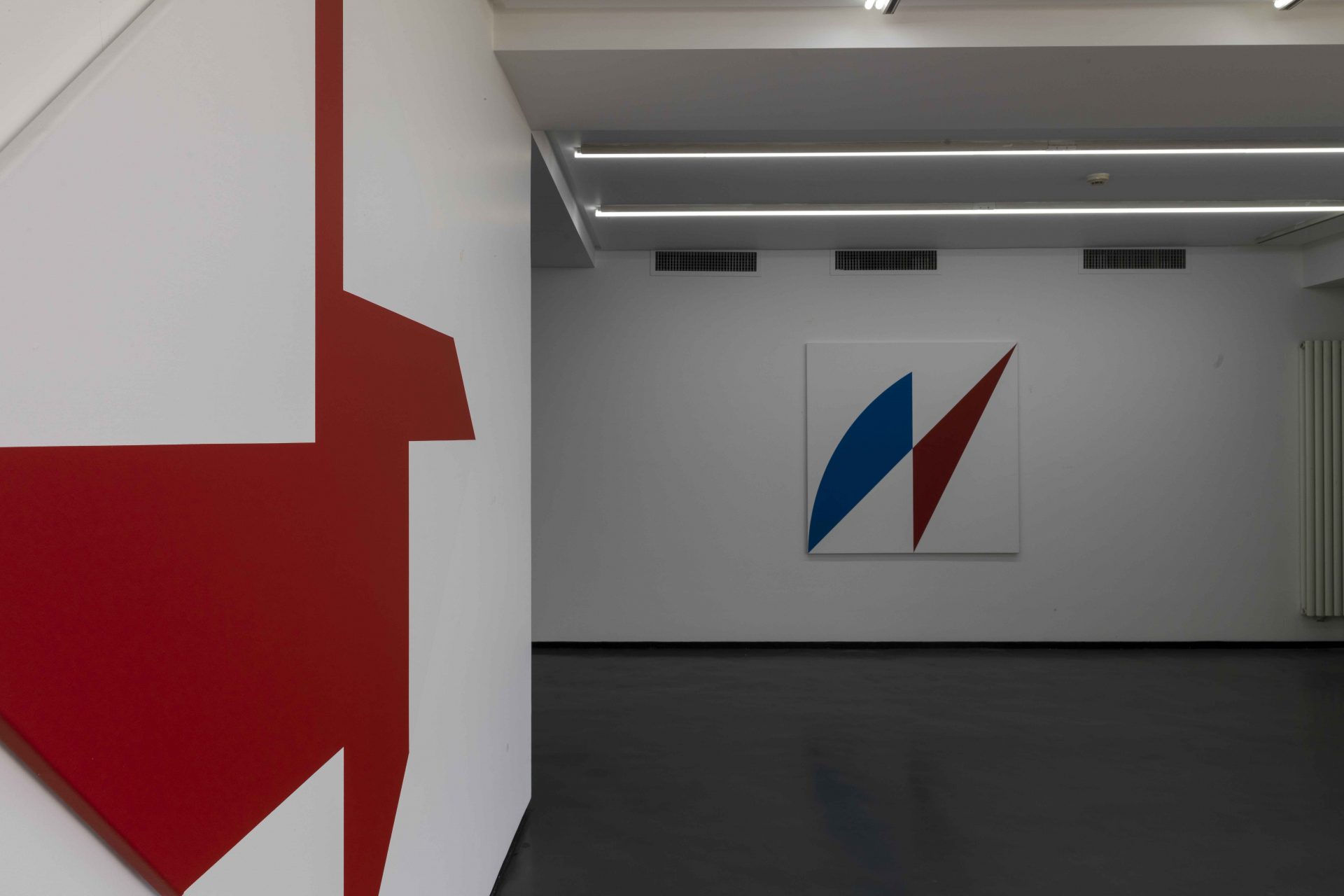 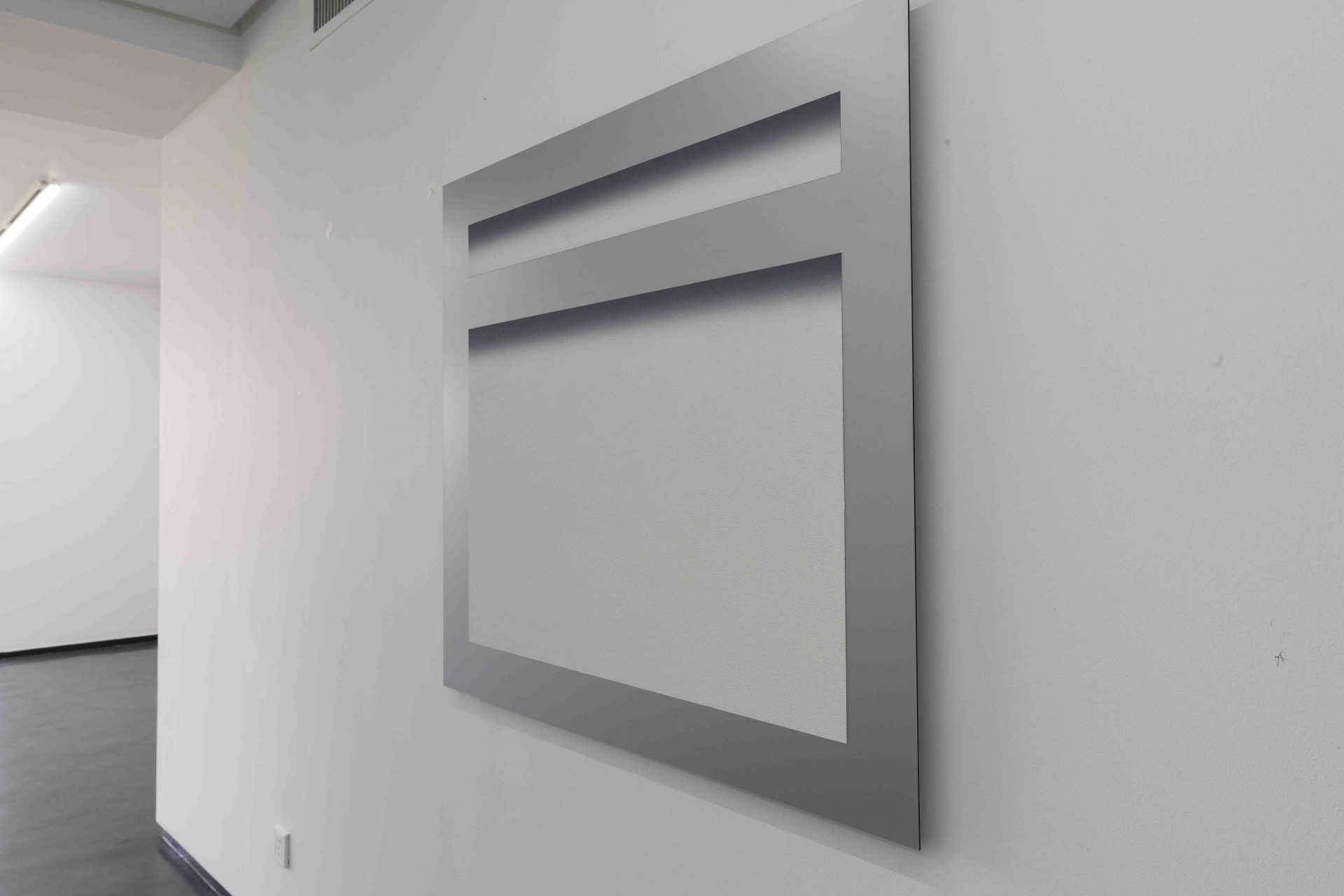 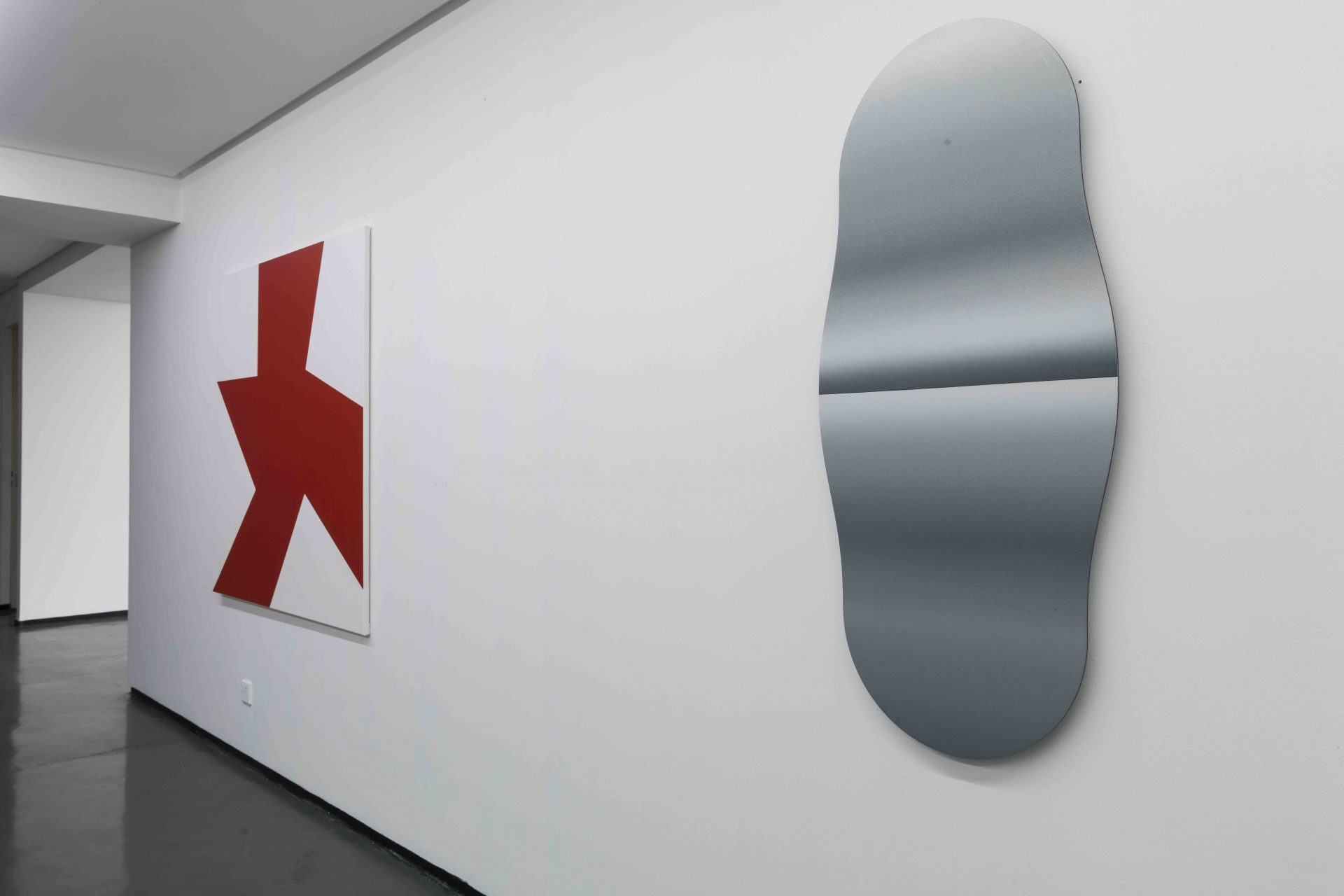 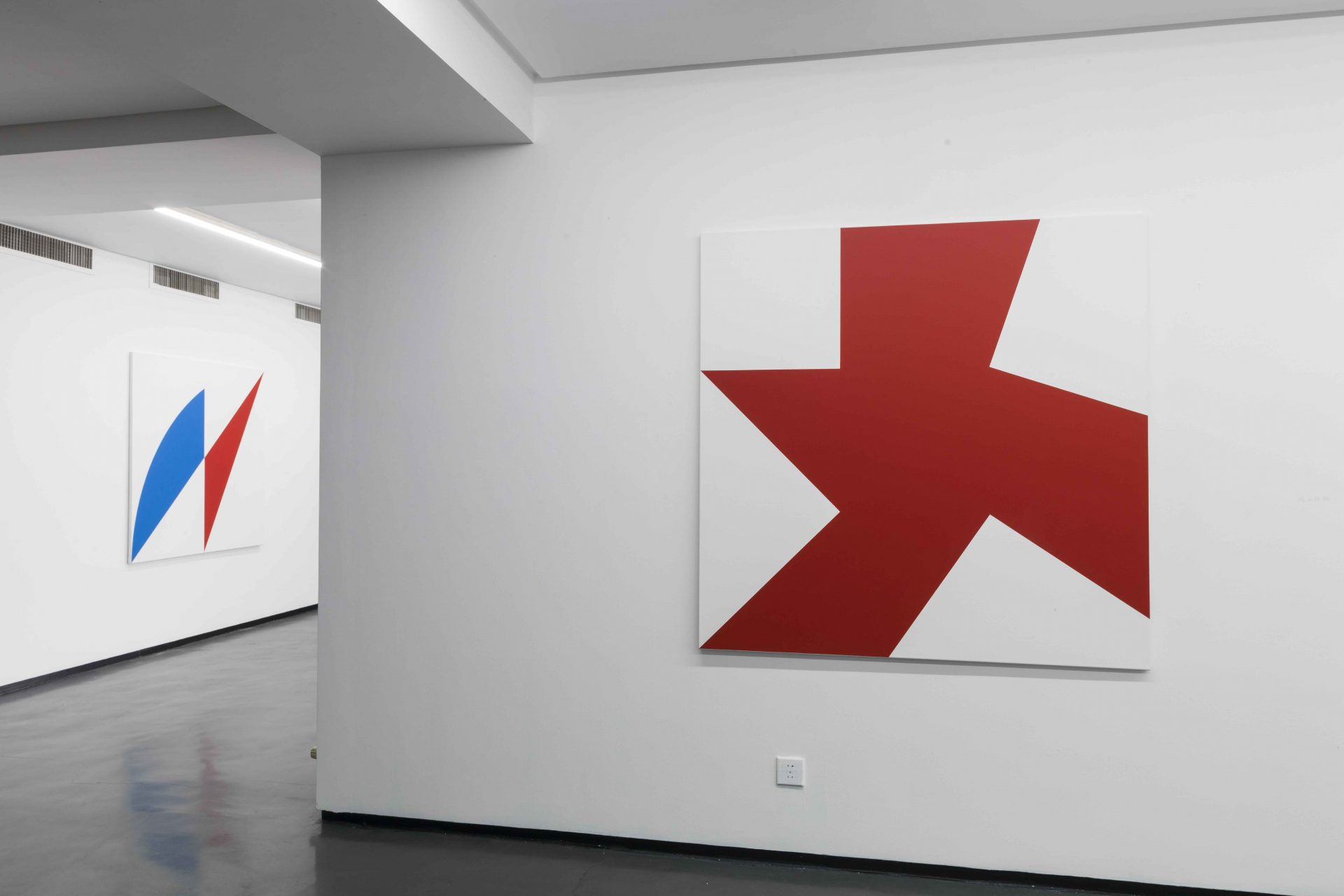 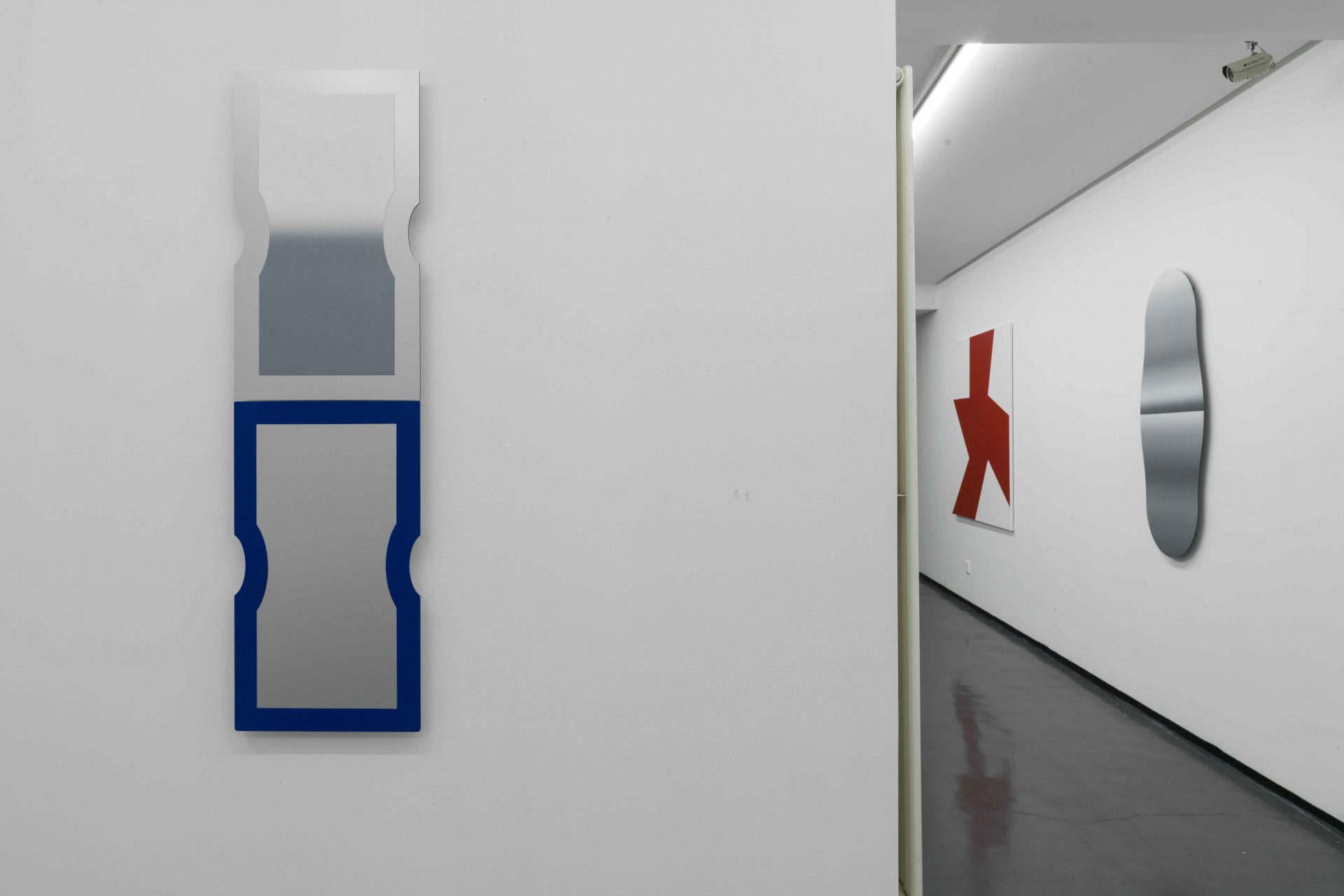 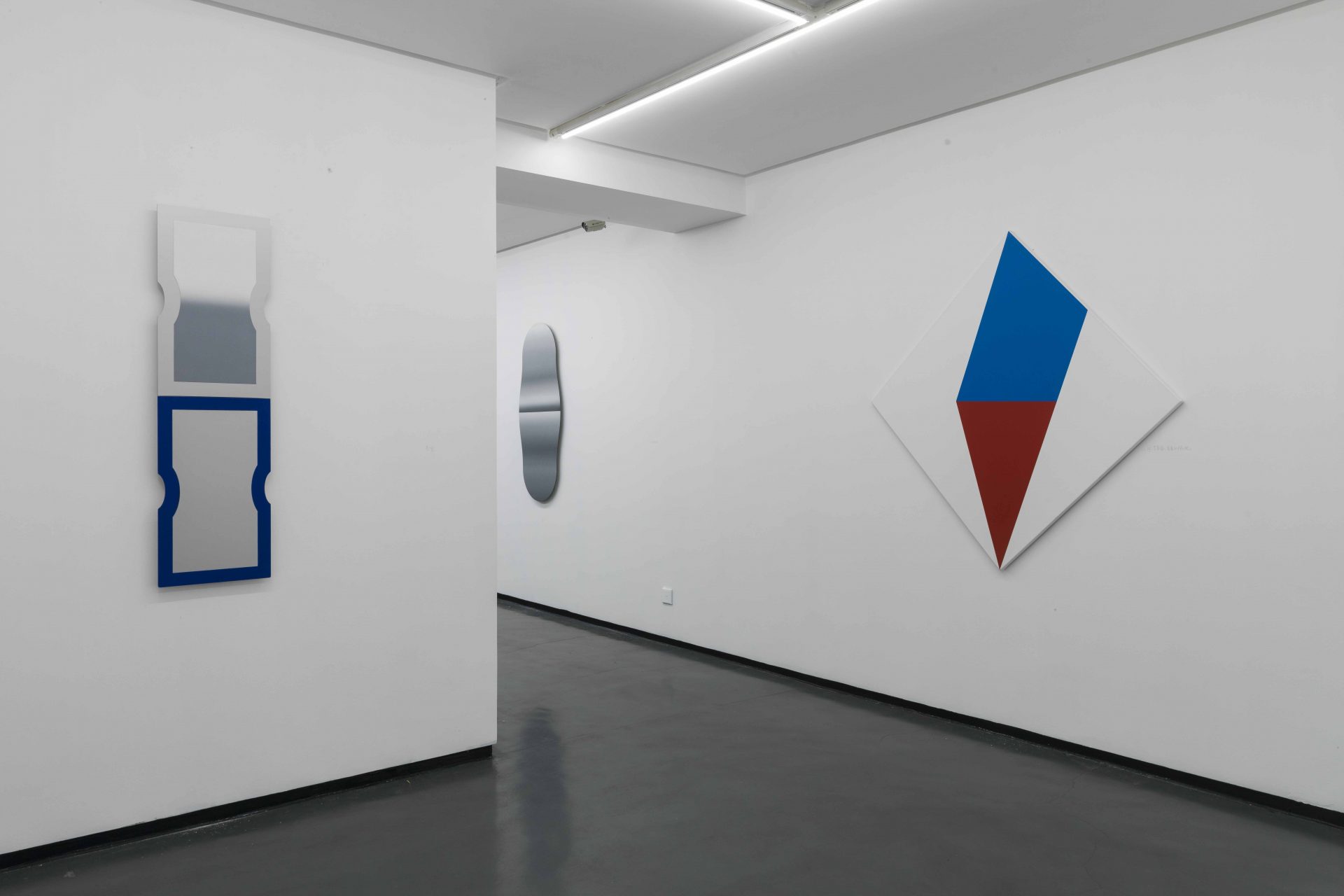 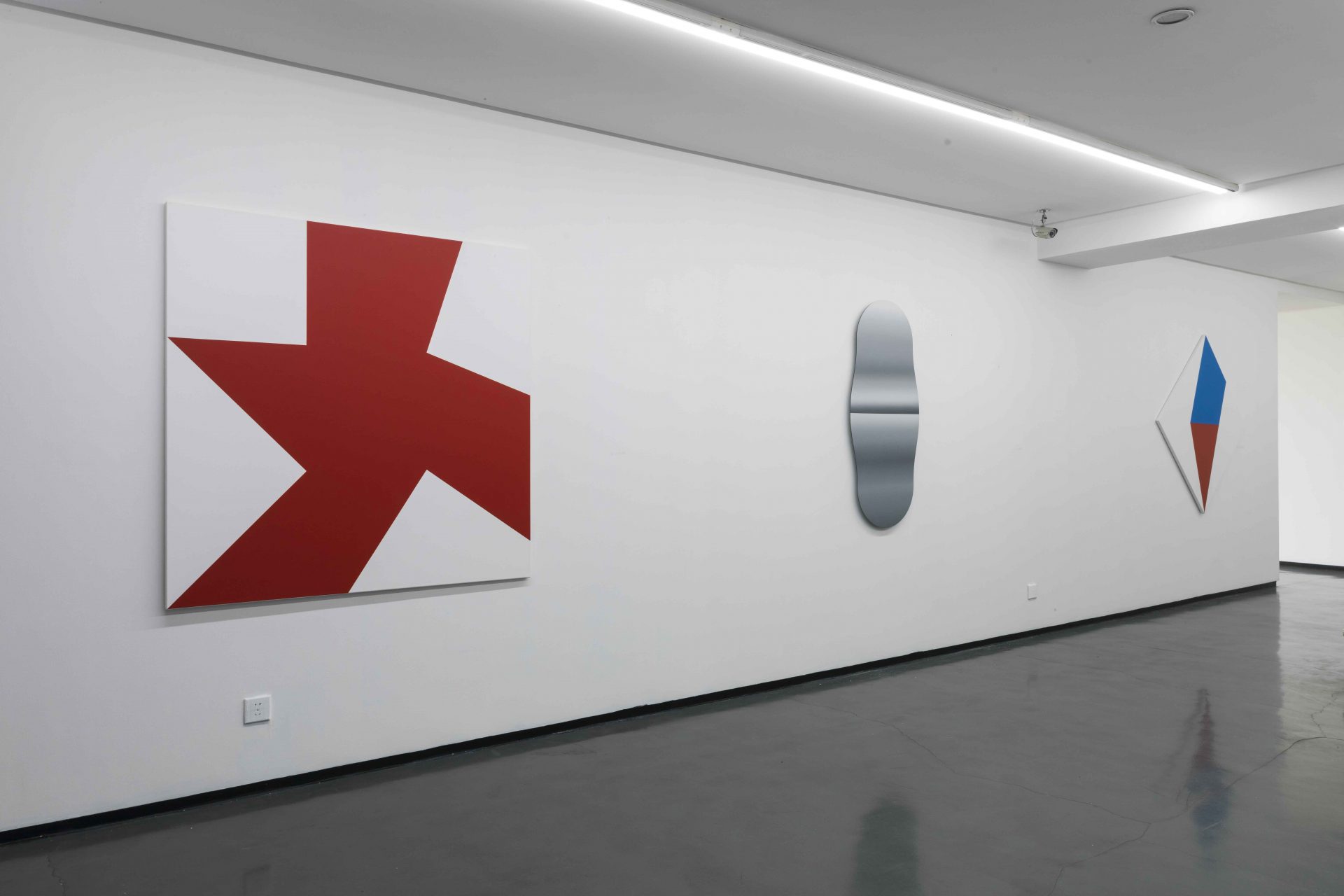 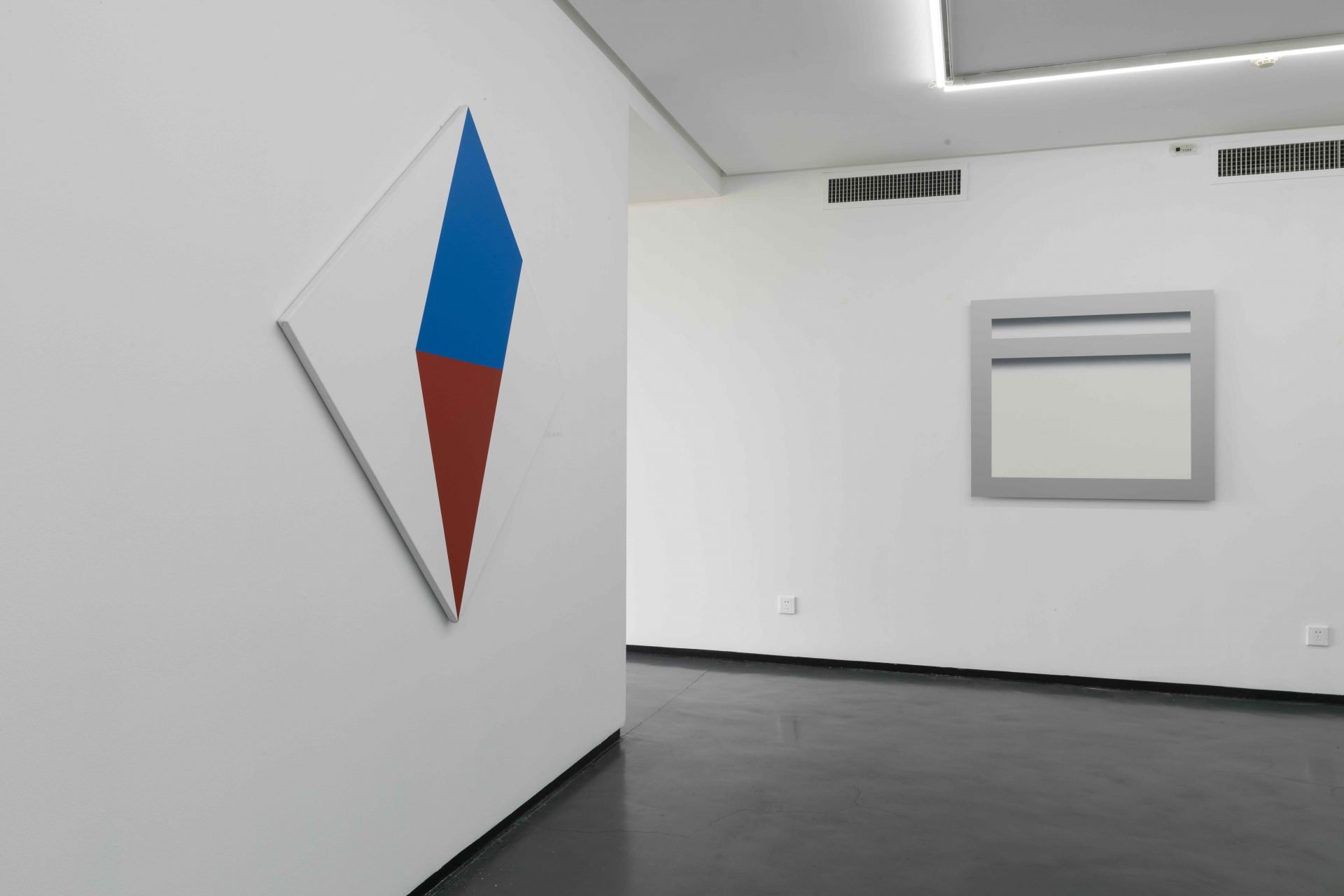 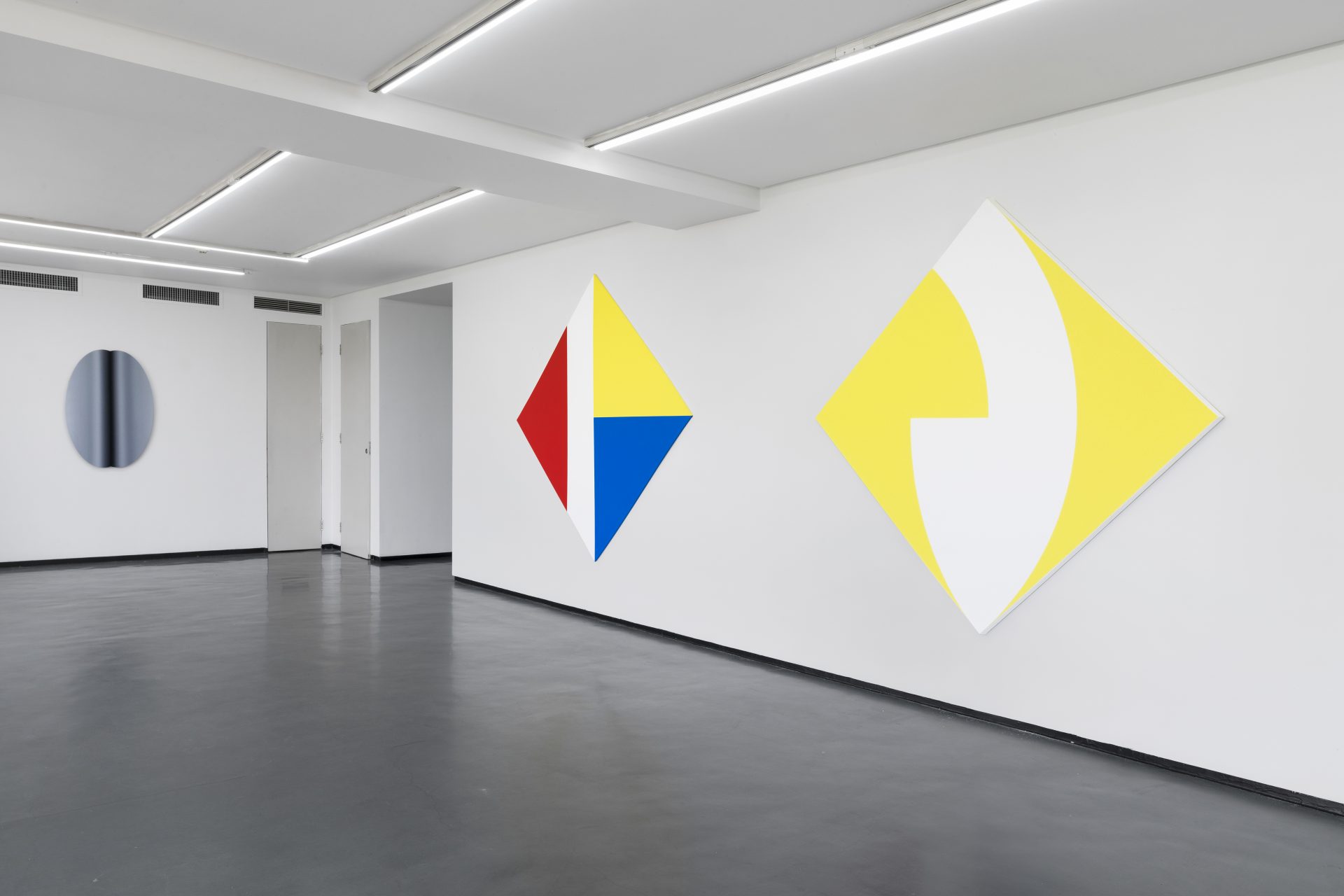 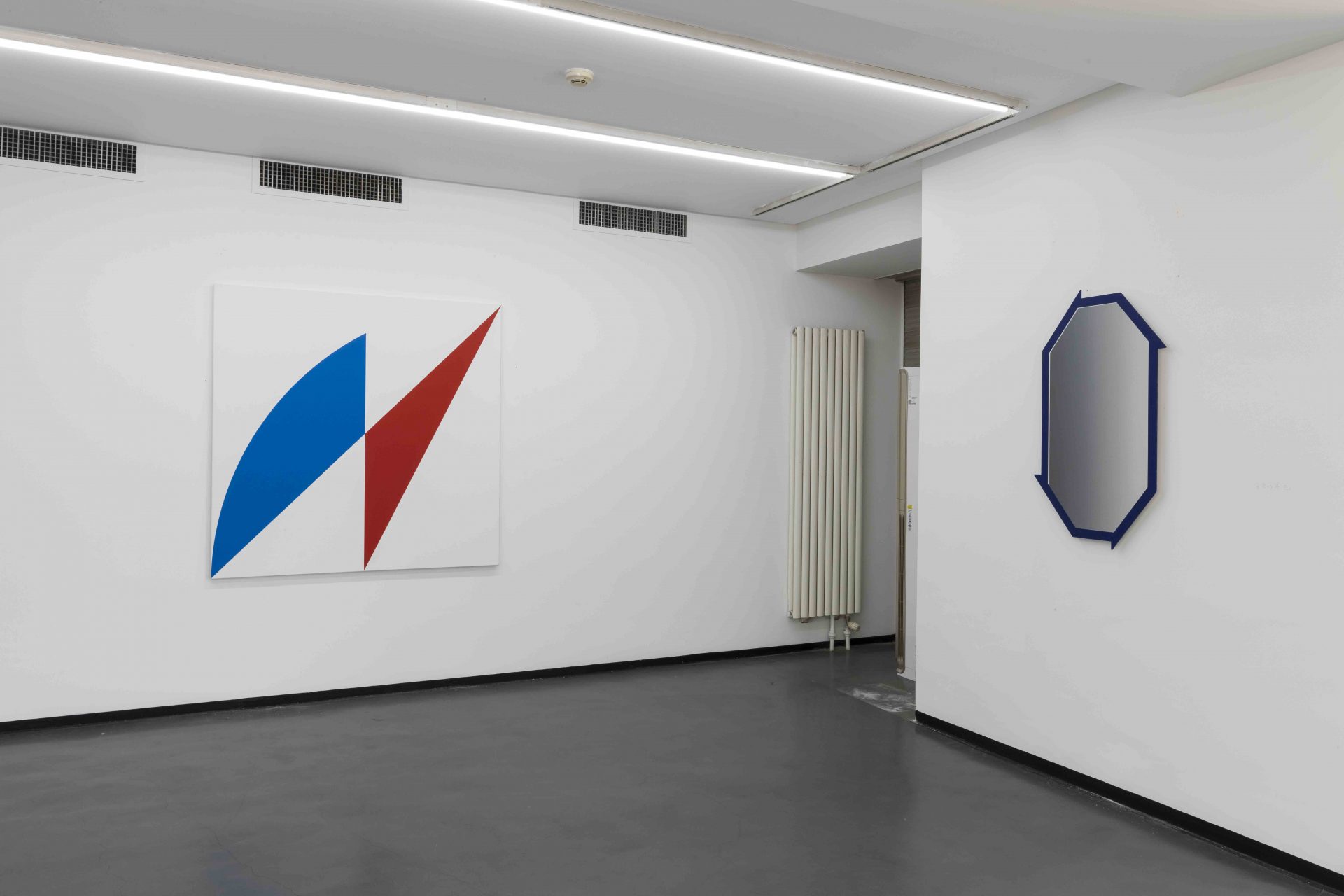 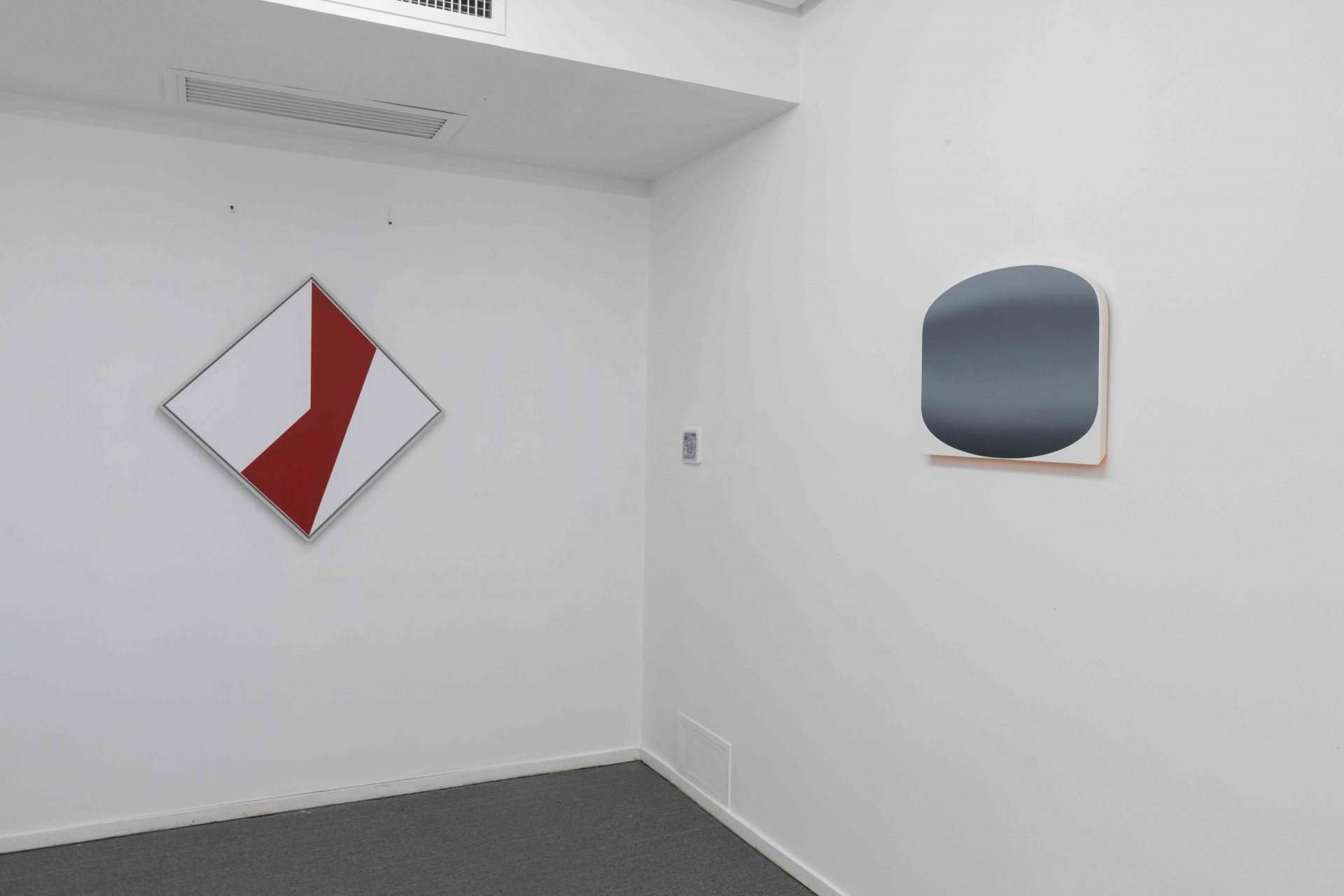 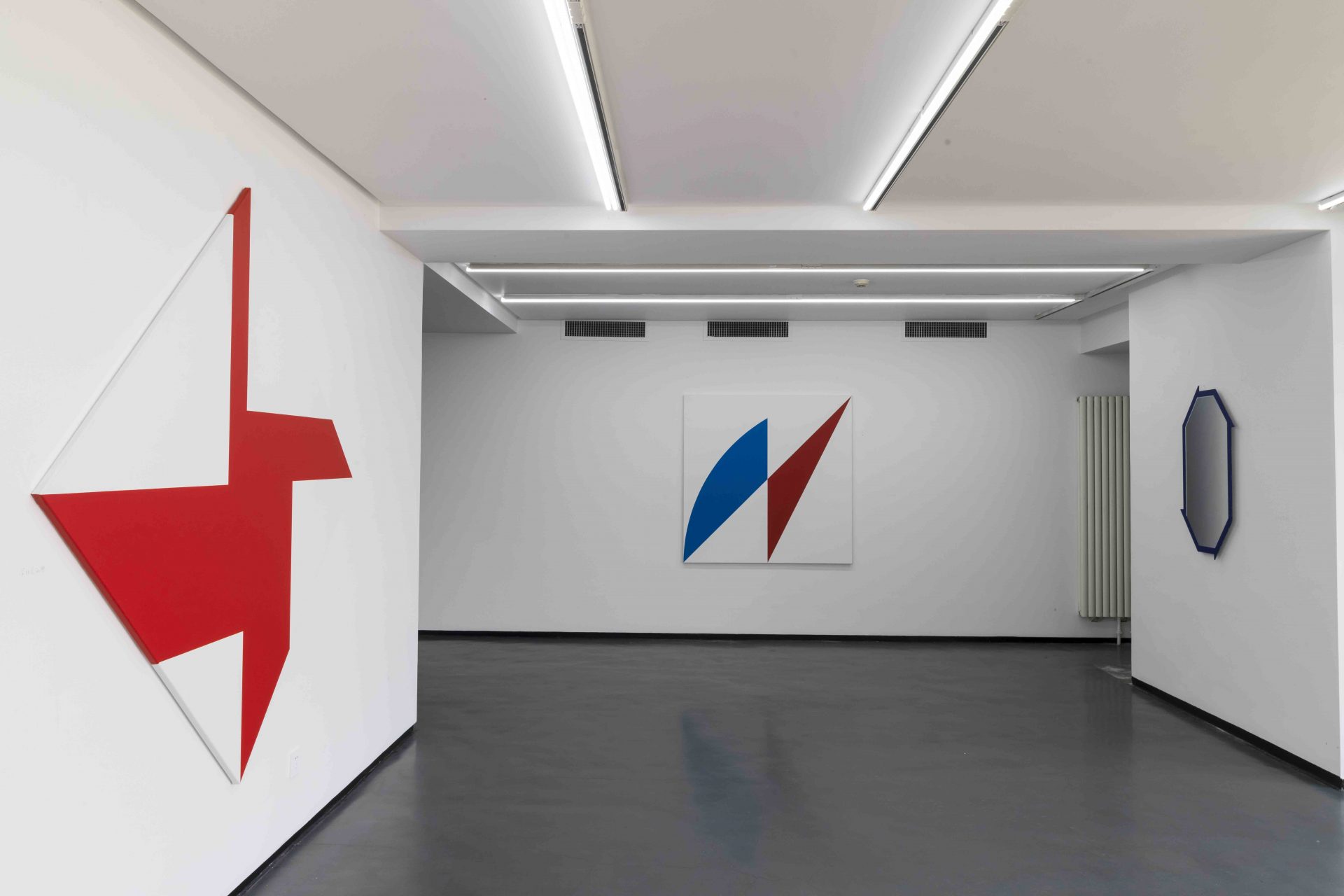 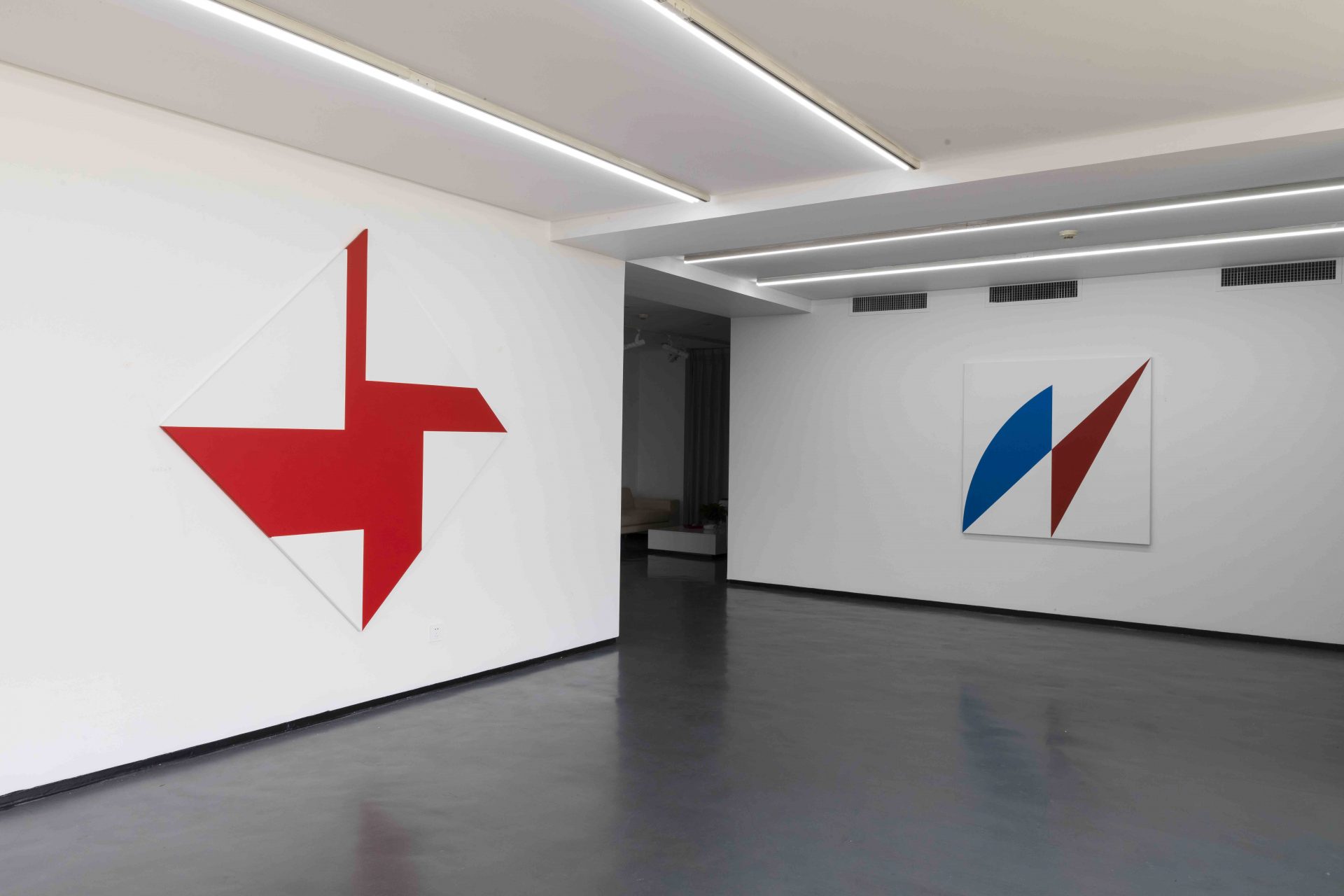 It’s about an exhibition of two artists from Netherland and China. They are living in different places geographically, but their arts shares the same thinking basis, which is the art of logics.

Bob Bonies(1937 – ) is a Dutch artist mainly works in The Hague. His most important works are known as Concretism Art. Beyond an artist, he was the director of the Free Academy in The Hague. Chen Wenji, Chinese artist, was a professor of Central Academy of Fine Arts in Beijing, now being an independent artist. Both of them have been well trained and professionally in academy. Therefore, they both have such academic background. However, they are not those kinds of normal professors who stick to convention, but the ones who are never-ending explore in their own field as an artist. Their works show their developing process of artistic style; especially Mr. Chen Wenji’s processing is more obviously. But this show is not a retrospective; what we are presenting are their recent works.
Although it might be unfamiliar with Bob Bonies in China, it doesn’t stop us to facing his works directly. I think, in this globalization era, the regionalism of paintings has already not been discussed any more. The shape of earth has concluded that there is no difference of “western” and “eastern”. The pure art is at the top position of the pyramid. Therefore, while they are moving upward along the slope, they will intersect on the top. This is what we called the logistic thinking of art. It is a visual form achieved through an inferential thinking process. In the history of human thought, such phenomenon is ubiquitous. Art is a part of the thought. Its trajectory completely coincides with the trajectory of the history of thought.

When we talk about the art of logical thinking, we must distinguish between the art of perceptual thinking and the art of logical thinking. I think that abstract painting belongs to the art of perceptual thinking, and the transition stage from geometric abstract painting to minimalist art is the dawn of the art of logical thinking.
Regardless of the artist’s own approval, in the history of contemporary art, the exhibition “Primary Structure” held at the Jewish Museum in New York on April 27, 1966 was considered as a declaration of the minimalist art to the world. Such art is questioning the painting quality of art, and emphasizing an art concept of primary structure which is more essential and original. For half a century, minimalism has not only become a milestone in the history of contemporary art, but also has influenced the relevant art divisions very extensively. The minimalist art itself is still continuing and developing. At that time, the works of artists participated in that exhibition were considered to be blunt, indifferent, and cold, because these works lacked lyricism, without desires, literary and storylines, even the entertainment which can make visual pleasant had also disappeared. Such has disappointed many audiences who are accustomed to abstract expressionist painting. So we can’t see those audiences who are moved by these new arts to appear in the exhibition. Only the artists themselves and those insightful critics can profoundly understand what is going on in the art world. Half a century later, the vast majority of artists who participated in the “primary structure” exhibition have become the darling of the art world today, and these influences are still fermenting and continuing.
The first exhibition of minimalist art was held in a museum, but it did not mean that minimalist art was born in 1966. In fact, as early as the late 1950s, artists in New York already started new artistic practices, and the exhibition just put these works together and shown them to the world. Why we talk the brief introduction of the origin of minimalist art here is that when we judge and discuss the value of some artworks and make comments, we must have a background of the art history. And we only put the objects we want to comment on in this background of art history, we can confirm its position. So it seems that the paintings of Bob and Chen Wenji have a solid background, that is, these logical paintings belong to those cold paintings that seem to lack emotions.

Frankly speaking, I am not very familiar with Bob’s works. I would like to thank Mr. Chen Wenji for his exalted invitation to curate this exhibition. When I first saw Bob’s work, I immediately felt that his works had strict modulus relations. Changes are carried out in a limited space. The so-called modulus is the balance and arrangement among the visual elements. Of course, its essence is a logical thinking of painting. This artist lives in Netherlands where De Stijl was born. The visual effect of his works makes people feel a kind of circular movement and balance. Some critic said: “His works are very powerful. They have appeared with a solemn image for decades. They never had any fashion.” I think if we say that these two artists have something in common, That is, Chen Wenji’s works are also the kind of independent exploration which doesn’t involve any fashion.
Bob’s works may not be marginal in the artistic environment of the Netherlands, but Chen Wenji’s works are among the minority in the Chinese art environment. Chinese contemporary art is in full swing, but Chen Wenji’s exploration is marginal and lonely. This state is particularly evident in his transformation process. Since we were together in a college in the 1970s and 1980s, I had the opportunity to understand the transformation process of his work from the 1970s to the present. The change was super big. Such transformation from realistic style to current style was only started 12 years ago. This state of marginality is in fact the environment of no one.
Before we comment on an artist’s works, we first judge the artist’s creative motives. This is especially important in China, because the market of Chinese contemporary art is often a kind of harassment to the artist’s pure creative status. Only a few artists don’t consider the market, fear and ignore the market during their creation. Only the works by this type of artist can be regarded as the art of exploration alone, and this quality is shown in Chen Wenji’s works. Therefore, the so-called margin is the state of creation far from the madding crowd.

Many works of Chen Wenji have a relationship of symmetry and dualitaet. I don’t know if this is a conscious or unconscious process, because there are many types of such relationships in traditional Chinese shapes. This is a kind of gene of culture. For example, the tiger symbol of the Warring States Period was the dual shape, and the jade stone was also a symmetrical shape with collapsible mirror image. Most of Chen Wenji’s works have such characteristics.
Bob’s works also have such relationship. And the difference from Chen’s works is Bob rotated and twist in some works. We know that whether it is a rotation or a twist, the movement is always revolve around a point or a line. This is a symmetric relationship in essence. For example, two rectangles with same length, after little dislocation, present a movement. And such work is also a kind of dualitaet. A square, rotated by 45 degrees and spread out from the center to the four sides is also a symmetrical relationship. Some of Bob’s works look very casual. In fact, if you put his work on the grid, you will find that the edges of some of the color are all developed basing on the diagonal. So each square is a modulus. The size of his works was established in accordance with the logic of the square.

The elements of arrangement in Chen Wenji’s works are very strong. The so-called arranging works are indispensable. He calls them “group paintings”. Opened the catalogue of Chen Wenji’s works, there have been four-piece paintings since 2001. In 2006, he began to paint paintings with two pieces. In 2007, there was a nine-piece painting. In 2008, a three-piece painting appeared again. In 2009, Nine Facets of Container (9 pieces) was a very spectacular group painting. The birth of the nine-piece paintings may be related to one of his painting named Bridge with Seventeen Archways in 2003. He is fascinated by this bridge because it had seventeen consecutive archways. And in 2007, he painted another “bridge with seventeen archways”. The difference was the implied meaning in the name. The name Be Away was a process of expressing the spread of archways. Interestingly, the outer frame of this painting is just like an archway itself. Such allegorical symbol and display is the mother of a series of group paintings. In this case, do we find the password for understanding Chen Wenji’s group painting?

The history of gradual changes in paintings is not long. Strictly speaking, it happened around the year of 1908, when Cubism emerged. French artist Lger purified the elements of gradation from cubist paintings, and made the gradation as the dominant position on this screen. To externalize the gradation elements, and develop it into visually-driven of the picture, two of the artists must be mentioned, they are Malevich and Rodchenko. Russian Supremacist and Constructivist Avant-garde art is a Russian Cubism derived from French Cubist painting. This is about Western modern art history. In fact, in the Japanese ukiyo-e paintings, there are also a lot of prints which solve the problems in spatial expression by using gradation. In Chen Wenji’s oil paintings, whether it is the early surreal works or the abstract paintings after 2006, and the minimalism works, the language of gradation is gradually independent. The degree of independence is the soul of the work.

Did you notice that minimalist art often restricts the basic elements, to express the basic structure and changes of objects, which are not boundless but basic relationships. For example, the words we said: contrast, displacement, dislocation, replacement, interleaving, opening and closing, up and down, causality, profit and loss, rotation, equal division, left and right, intensity, gradation, rising and falling, horizontal and vertical, bite, fold, concave-convex, etc., the rich vocabulary in the Chinese language represents the various movement states. The keywords of many minimalism works have the same goal with above words which have special meaning in Chinese. At this time, we can see that their works have the same attributes beyond the colors, which is they show the basic relationship of objects’ movement, and we can find these relationships in the preceding phrases.

I forgot where I saw a paragraph by Morandi. He said that there are two languages in the world to express the understanding of objects. One is text and the other is geometry. This immediately reminds me about Cézanne’s observation method; he considered the objects depicted as various geometric shapes.
Both Bob and Chen Wenji use geometric shapes to explain the world, while Bob’s works are square in shape. Chen Wenji’s works, in addition to squares, have irregular shapes and round shapes, especially many independent shapes. These are the unusual shapes in the so-called frame paintings. These shapes make the body of the painting stand out in the surrounding environment, which gave me more connection in mind. We know that the shape of Chinese artifacts, especially those pottery, bronze ware, porcelain, jade, wood ware, lacquer ware, bamboo ware, etc., all have their own unique and independent shapes, representing objects’ movement, weather, and cosmology in a confined space. I think the unique form shown by Chen Wenji’s works has a certain similarity from the point of view of cultural genes, that is, one object is one world.

In this way, in the early spring of Beijing, writing the above text would be my interpretation of two artists’ works, and the audience would have different understandings and benefits when face to these works. It is the expectation of artist and critics.
April 9, 2018 Postmodern City in Beijing