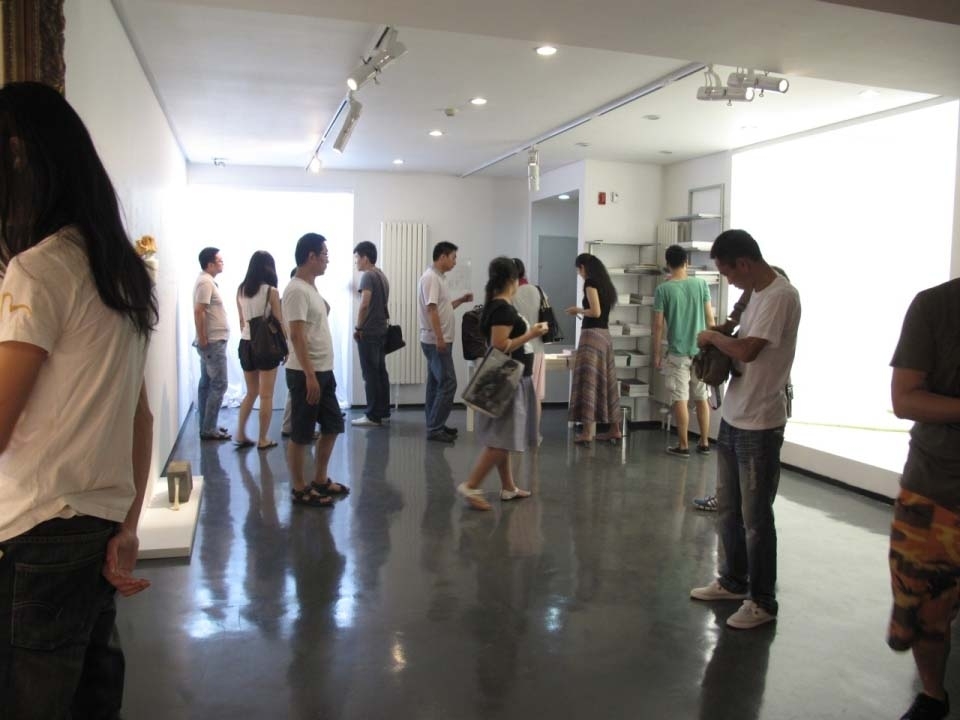 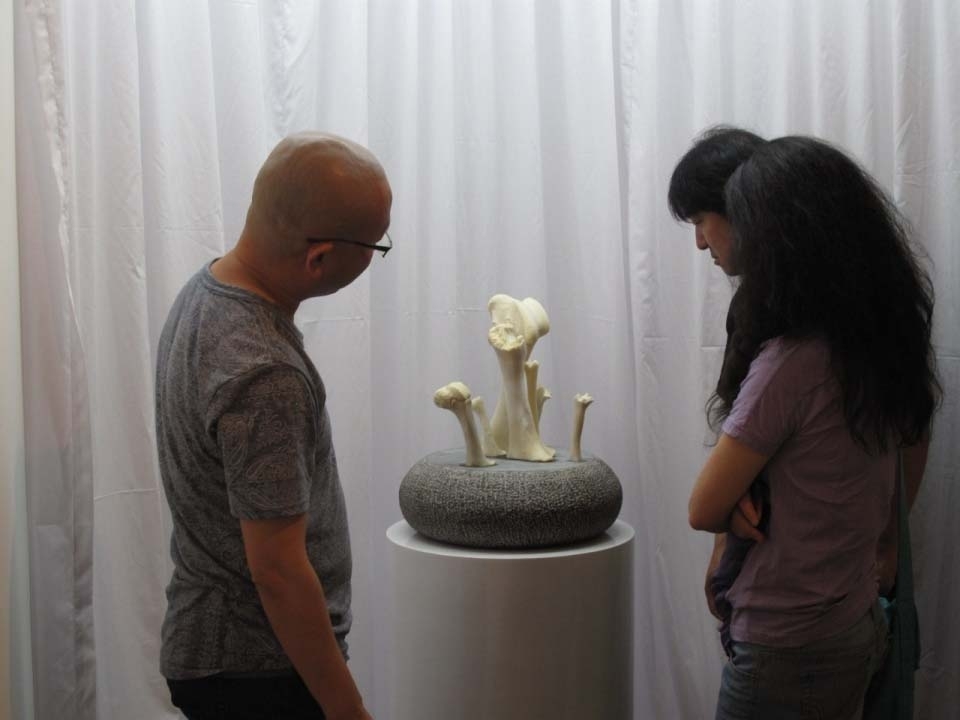 In Xiao Yu’s recent work we see not so much the unique and rarefied, but rather the ordinary. His deceptively simple constructions tease us into viewing his works at close range, slowly revealing their internal complexity as we linger close. He relies on the gallery context to separate his familiar materials from their workaday environments, while instilling his recent projects with a playful ambiguity that complicates their initial appearance as assemblages of common objects.
For his contribution to the major group exhibition Guang Xi, curated by Jiang Jiehong this spring at the Guangdong Museum of Art, Xiao Yu produced a series of ceramic Go (Weiqi) boards presented in a long row. The ten games, all ostensibly in progress, have had their game stones melted through the firing process, with the black-and-white pieces reduced to glossy glass pools that flow together. Go, the ancient Chinese board game dating back more than 2,000 years, is known for complex strategies that require a balance of defensive and offensive play. As a response to the exhibition’s theme of guang xi, the term for a broad set of social networks and relationships, Xiao Yu’s Go game boards suggest a fitting commentary on the intricate moves for power and dominance in contemporary society. The game parallels the real life attention required to advance from and defend what one has laid claim to. But in the installation all this careful positioning is disrupted, the heat of the ceramic firing the event that has blurred this play for control. This installation is the first in a series of four solo and group exhibitions, all completed since the spring of 2011, where Xiao Yu examines the mechanisms of power and status.
For his current installation at the PIN gallery in Beijing, Xiao Yu reactivates a series of expressionistic figurative paintings, produced in 1987 during his last year at art school, by reframing the works in elaborate gilded frames. Presented alongside these paintings are square sculptures built with interlocked framing stock that create protruding and receding pyramid forms that cantilever off the wall. These frames-turned-sculptures engulf the centre areas that would normally present a painting. As the sculptural forms are created with the same materials that ostentatiously frame the paintings, they create a formal dialogue that supersedes what would have been a more conventional reading of the earlier works. The act of “framing” optically and symbolically interferes with our engagement with the paintings. One would assume then that the choice of exhibiting his early student work in this manner has less to do with providing an opportunity to revisit his artistic beginnings, than using them within a narrative that draws attention to the means by which art is identified, separated from other objects or activities, and theoretically “framed.”

Elaborately gilded frames are rarely used on contemporary works, with the exception of those used in faux-elegant interior-design applications. Historically, such frames were used to reflect the high status of the work. The wider use of the carved frame in Europe developed during the twelfth century, becoming more formalized through commissions for the state and church in fourteenth- and fifteenth-century renaissance painting, and was used as a means to guide the viewer’s gaze into the pictorial space. Modernism, particularly abstraction’s agenda to eliminate the representative window and set the artwork within our directly lived space reduced the frame to little more than a protective edge, if one is used at all. In re-introducing the grand frame, and allowing it, as a wall sculpture, to consume the entire pictorial surface, Xiao Yu is elevating the “frame” above the subject. It is not the artistic creation, but the process of framing that is highlighted in these works. The installation gives concrete form to the complex relationship between artistic intention and the means by which art is assigned meaning and value within contemporary artistic discourse. The frame is used as a symbolic reference to changing societal and cultural values that impact the reception of the work, and a means to critique the process of contextualizing the art object.
A related strategy is taken up in his exhibition Scenery, at aye gallery, where the four walls, floor, and ceiling of the main exhibition room are transformed into empty paintings by running large framing stock along each corner. The resulting box of large-scale frames transforms the otherwise empty space into the subject of the work. With nothing to direct our attention to other then the fine craftsmanship of the framed room, the installation offers an open question about the function of framing, in this case to be understood as the roles of the gallery and the larger artistic infrastructure in assigning meaning and value. Clearly the excessiveness of the gold frames is antithetical to Xiao Yu’s regular presentation of his work, and they are used here as a slightly garish reminder of the processes at work. The installation resonates with the crisp professional packaging of nothing, a finely formed container without content. I wonder if we, the audience, can be comfortable viewing an installation so intentionally empty of subject. The wily stance pushed forward here challenges us to look below the veneer to the sometimes dubious mechanisms at work in the art-world.
In both installations Xiao Yu considers the passage of time. In the PIN gallery installation Xiao has “framed” his earlier paintings in a way that invites us to consider the period of time from their creation to their presentation as part of a new installation. In his use of framing stock, normally a material used to complete the presentation of an artwork, he seems to be suggesting that the rapid transformations in Chinese contemporary art have led to many artistic practices that have produced primarily fancy polished surfaces; art as finishing material. In the framed room at aye gallery, Xiao Yu plays with time by creating an installation that acts as a stage the viewer unwittingly enters. More than anything it is the duration of our visit that is being framed by the work. The work surrounds us, making us more aware of our movements, pauses, and gazes. In an art space essentially devoid of art, it is our bodies, and the period of time we spend in the room, that we gradually become more aware of. These two conceptions of time, the chronological unfolding of events and the momentary awareness of the present, establish the primary difference in the reading of the two installations.
It is an form of power relations that are highlighted in The Weight of Creature’s Attack (2011) presented in the group exhibition Micro Life at the Soka gallery in the 798 Art District. The sculpture is comprised of a standard electric retail scale with condoms filled with mastodon tusk powder stacked on top. The bulbous sacks look to me vaguely like tusks, while carrying obvious phallic and breast connotations. The work incorporates the discarded waste from a rare and collected material, assigning a specific but meaningless measure of its weight. Collecting, the acquiring of the rare or novel, sometimes for extraordinary amounts of money, is here seen as based on a set of arbitrary values. The same precious material of the tusk carvings is repacked by the artist as an ambiguous consumer item of uncertain use. In the work, the condom acts as container and the tusk powder as content. Both flexible and stubborn, they cohabit in constant tension and agreement, acting as the receptor and the initiator of reshaping. Through his manipulation, the condom becomes the cover of the residue of a massive land animal, while the tusk powder fills the most common tool in helping humans to isolate sex from procreation. In this juxtaposition, the ghosts of sexual experience — pleasure, invasion, or indifference — take a new shape, and ironically contest the idea that everything can be measured, compared, and eventually valued.

Mounted on the wall beside The Weight of Creature’s Attack (2011) is a white ceramic bowl with a pair of chopsticks running through its side. The most basic culinary utensils are rendered unusable, the bowl and chopsticks are linked in a manner that makes eating impossible. The simplicity of the work makes only more immediate the challenges faced by a large segment of the population of the world to find basic sustenance. Having the bowl and chopsticks presented intact implies for me not a lack of proper tools to provide food, but rather the disjointed configuration of our food supply. Everything is in place but not ordered properly, the iron rice bowl replaced with an elegant, but useless white ceramic bowl.

Not tied to any specific artistic aesthetic, Xiao Yu has permitted himself wide latitude to experiment without concern for the appearance of artistic continuity. Yet while his work progresses through a diverse range of mediums and forms, often reordering the common, a consistent thread can be found in his continuing commitment to examine the underlining constructs that direct our public actions. The works showcased in these recent exhibitions create a theatrical staging of the transformations that are reshaping the social contract, both in the art-world and in Chinese society in general. The work is increasingly simple in method, a process of distillation is used where the familiar is given new dimension and meaning. We are asked to negotiate through the altered relationships he constructs, creating individual narratives drawn out of the stark juxtapositions present. Xiao Yu is less involved in isolated and introspective studio ruminations than he is in an immediate engagement with world around him from which he borrows directly. Borrowing not only found objects, but as well, patterns of our regular exchange with the material world. Our initial response to the Weight of Creature’s Attack is as it would be at any fruit stand: we need to see the weight of the object. Only afterwards do we realize how little this precise measurement does to solve the question the works seems to be posing. I believe much of the tension, so common to our experience of his work, comes from the play between the immediately familiar and entirely foreign that are so often simultaneously present. His recent projects on the systems of power that direct our food supply, reception of art, sexuality, and the pervasive social influence of guang xi, resonate with the vitality of new ideas and positions open to change and modification; his work proposes a series of irony-laced propositions offered up for contemplation.