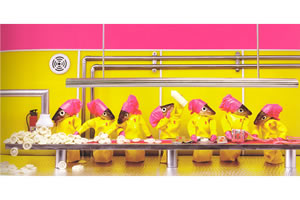 Anne-Catherine Becker-Echivard is an artist in the same vain as the authors of moral stories or fables in the 18th century. As La Fontaine did in his time, she recreates the world according to her own universe. She creates the models in which the characters are fishes dressed in the costumes made by her hands and placed in the scenery of her own construction. Then, thanks to the photography, she makes a world dreamlike, funny and alarming, restoring the faults or the absurdity of our consumption society.

At the same time as the expositions devoted to art history, the Pinacothèque hopes to give a place to the contemporary photography on the second floor and show the works of young artists. For this first exposition of the photography, I have chosen to exhibit the original photos of this young and talented French-German artist.

Anne-Catherine just met with a popular success during an exhibition outdoors in the village of Bercy. She has also drawn a lot of attention during the Parcours Photographique Parisien (PPP), in June. Here I offer her an occasion to complete a beautiful journey 2007.

Anne-Catherine is originally from a French-German family, as part of the Generation 68, she was much engaged in the confrontation in May 68. Her childhood was happy. Her parents refused the model of traditional “bourgeois” education and brought her up out of the habitual norms. Instead of living on the tableland of Larzac, after her prison for several jets of stones in May 68, her brilliant neuropsychiatries German father and her mother who also became doctor moved to Berlin. For the holidays they chose the Normandy where they bought a carrot field of one hectare. The little girl had no interest for the dolls; she created soon her first games with the animals, living or dead. Those were the rats she held with a leash and disguised with the doll clothes that her mother made for her. She took her rats everywhere, who served as her “doudou”.

After that was the discovery of the world of fish during her apprenticeship of fishing by the side of Normandy fishermen. She used the fish to make her dolls. Since then, she has not ceased to reconstruct the world through the heads of fish which her continued to dress up and to make live in a world completely created by her and photographed in her room without any special effect or digital amendment.

Text about my work:
The question that everyone asks himself is: why a world of fish? Why the fish rather than other animals? Her staging presentation of the fish seduces, fascinates, captivates and speaks immediately and directly to everyone. Does it come from the fact that man is originally from the fish? Does that bring this feeling both symbolic and comforting, but also extremely strange?

For this long, traditional and meticulous work, she draws from her literary or cinematic references to recreate her universe. In a shadowy world completely reconstructed with the handmade decors, sometimes for many a month she presents her dead fishes, to whom she gives a second life but also the expressions.

“I buy my fish from Halles de Rungis, at the Reynaud’s or in the market near my home. On arriving at my studio, I wash the fishes, scale them, and eviscerate them. Then I keep the heads, and their body, pass to the pan. Take the fishes in my factories for an example, they are in uniforms. They are asexual and give a global message. That is neither the condition of women nor the condition of men. That is man, the human being, in general. The factories represent a state conform to the man, to the common citizen as there is so much work in the production line, ‘the modern times’. The dehumanization. We are victims of our own evolution or of our own revolution. We are the suffering conformists. In my photography, I do not try to present the good nor the bad. It’s never simply funny, laborious, happy, tender or hard. There is always much tragic, sadness or sorrow in the comedy. That is what touches me. That is what I try to translate.”

Another text from B. Delarue :

In the works of Anne-Catherine Becker-Echivard, the fish hides the human being from us in the same way as the forest hides itself behind the trees. The choice of fish is not an accident. As an animal without hair, fish has nothing like man, only to make its death more unfamiliar to us. We cannot have attachment for it simply because its natural milieu is different from ours. When man and fish have their paths crossed, one is dead, the other alive, and often in full digestion.

With the death of fish, Anne-Catherine makes alive the humanity in a role-playing game, which is unusual but follows the old principle of fables. Since in her work, we find as much La Fontaine as Granville, and humor in addition.

The reality is in the taste of staged presentation. In this intimate theater, the artist is at the same time story writer, director, actress, costume designer, decorator and still photographer. In fact she is the absolute master of her universe and, in this way, she experiences all the joy but also all the accidents. Free and lonesome, she takes, in a way, all the humanity on her shoulder. I herewith want to say that nothing is unmotivated: whether it’s the humor, the derision, the mania of details, or the shadow of Bukowski.

Give life (privilege of the gods) implicates an acute perception of things, a piercing look of the diurnal owl but also of the humility, when it comes to comprehend all these little zips that are our grand mania. What we say about these photos is that it’s above all an accumulation of details. As if life started with an amount of attention, cross of regards and some tense arms.

Smiling in front of a work is already accepting it. For this trap, we are the consent victims. Here enjoyment, rather than reason, goes first.
Hide as she does behind the fish and the fish, poor guy, under his bonnet, Anne-Catherine is unveiled in her own net, trapped like the workers in “The Modern Times” who enclose their own image in aluminum paper to serve themselves better to the consumption.