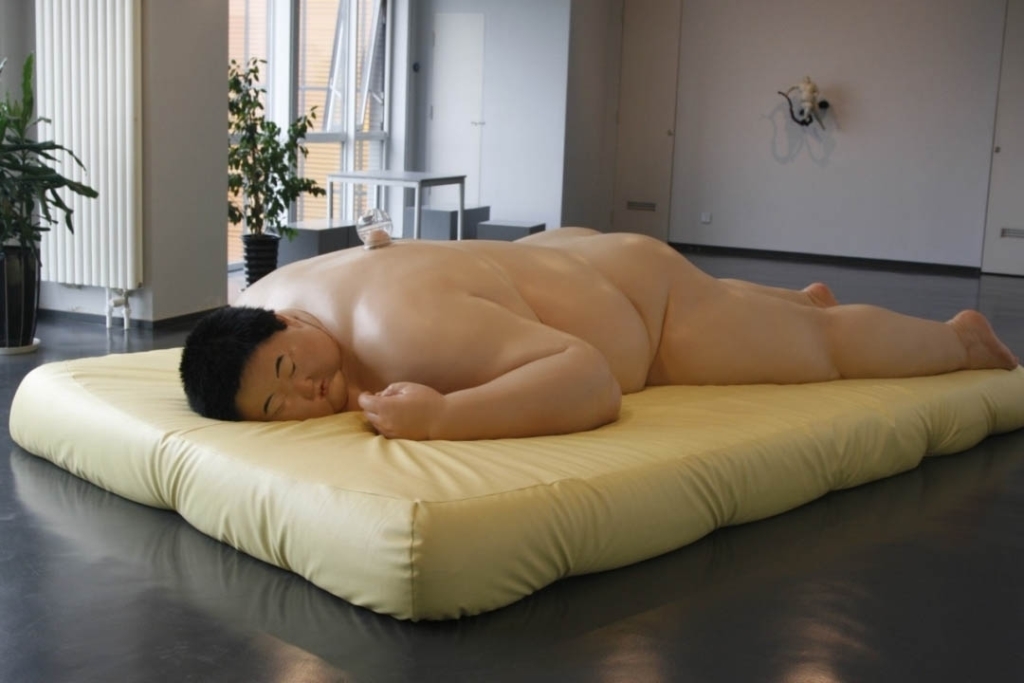 Fatty
——Written Before the Solo Exhibition of Mu Boyan

In 2003, Mu Boyan displayed his series work “Bath Center” in the public bathhouse of the Central Academy of Fine Arts. All fatties! In the real environment, standing in the wooden barrel to scrub, sitting on the stool to puff, lying prone in the cabinet to peep, they all look hot and dry, also quite magnificent interesting. It is said, that group of sculpture was accepted to make for a bath center as “a job for living”. From that later to 2007, Mu Boyan has concentrated continuously on portraying the images of fat person.

However, something is simpler, contains more implications. The fatty, in the West, can be understood the bodily overload caused by unscientifically meals structure, this crowd even occupy about 50% in US population, it’s really ordinary. In China, when it mentions the fat person, it symbolizes the life abundance. Today, the gap between rich and poor enlarges day by day, the fatty no longer has the symbolic significance as “laughing then growing fat”, but is often explained visually as “occupying social resources excessively”. Only the name of “young fatty” has the commendatory meaning of cuteness.

The “Fatty” of Mu Boyan, precisely concerns the desire satisfied and unsatisfied. With in his conversation, he explained that, he portrays the fat person, chooses the image of fat person as a theme to create, the reason is just from his impression about the environment. This sounds very mysterious, an abstract, difficult to indicate, great and disordered Chinese reality, provided him the explanation to the image of fat person, how grand dielectric it needs to carry! In the series work “Fatty”, looking from the sculpture dimensions, the fat person is separated into two extreme sorts. One is too extremely huge to be unable to tolerate, it may press the floor sinking .Another one is extremely miniature, the movement is light and lively, without the weight feeling completely. These fatties with different physique are not like humanity, but some kind of organism which can grow and increase infinitely. It seems the “Tai Sui”(an ancient name for the planet Jupiter ) digged from the earth in Chinese folk, even it is cut off a piece of meat, also can grow within several days to make up.

Colombian artist Fernado Botero is famous also for his persistence in drawing and the sculpture on fatty .His “fatty” are often understood as ridicules to the aristocrat and the middle class. The distortion characters remain nothing of the original stateliness and innocence. Recently, Botero even took the scandal about United States Military in Iraq’s cruelty to prisoners as the source material, stroking straightly the human ignominy.

Same with Botero, Mu Boyan’s “Fatty” also has the bright color of critique. The fat people are not joyful when their desire satisfied maximally. There is no expression on their faces; the postures are not comfortable probably. The jade fatty crawls on the tree which is made from gold—the gold and jade are predestined matching, abundant completely, as if with all happy elements, but displayed by the artist, it also appears senselessness even the dismals. The fatty portrayed by the artist with his pity is not a statue of a person; the artist wants to tell us: “fatty” exists in each body of us.